The task that was to be performed in this project was to construct a Rube Goldberg Machine that could catch and throw a Ping-Pong ball. 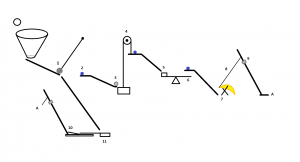 The final design is a Rube Goldberg machine which has eleven energy transfers and seven sources of potential energy.  The device will be initiated by the dropping of a Ping Pong ball into a Styrofoam cup mounted to a cardboard tower. 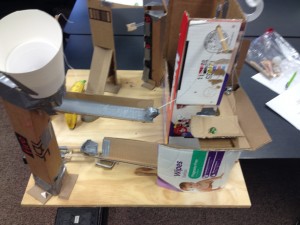 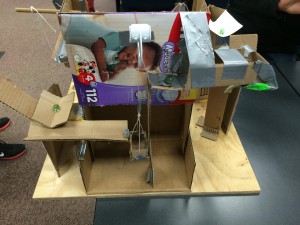 The marble hits a nut at the end of the ramp, which causes the nut and marble to fall and then land in a box on one end of the pulley.  This causes the weight to become uneven and the side with the weights in it start to fall towards the plywood base. The other end of the pulley is tied to the edge of a cardboard ramp which has another marble on it. As the string pulls on this side, the incline of the ramp increases and the marble rolls down, landing on the elevated end of a lever. 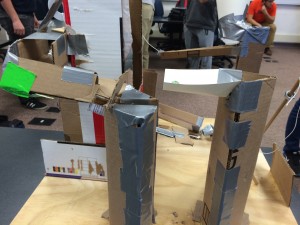 The other end of the lever raises and then hits the ramp which has third marble on it. The third marble starts to roll down a ramp and hits some Popsicle sticks that are propping up a banana tied to a string. 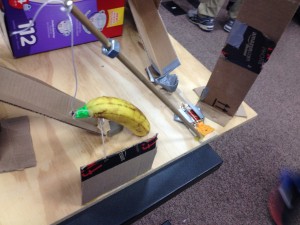 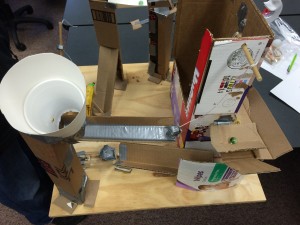 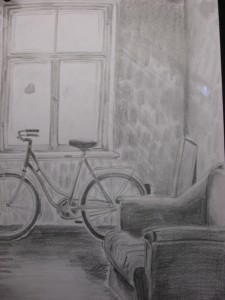 The second design competition happened near Homecoming Weekend. Our challenge is building product for preppers. We had about a week to come up with an idea and build prototype for it, then have a pitch in front of Bucknell Engineering Alumni Association to present our product.
So, my ideas is a light (LED) powered by water. It is the combination of a joule thief and galvanic cell. 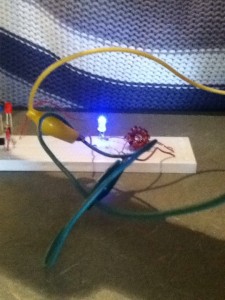 I spent the whole week for this project. During my time working, I meet and make friend with many awesome professors such as Prof Siegel and Prof Kennedy. They complimented my ideas. On that week, I literally meet Matt Lamparter- head of Electrical Engineer Labs every day for materials. 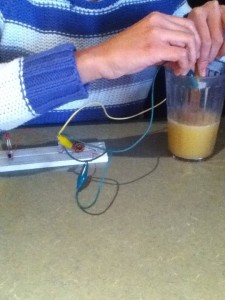 I encountered a lot of problems while working on the project. My first problem is that the joule thief didn’t work, which takes me a lot of time to troubleshoot it. Second, when I plugged it in water, the LED didn’t light up because water only generate 0.8V while the circuit need 1.5V. I realized that water baterries should be connected in series but it was too late. So in my presentation, I plugged it in orange juice instead. 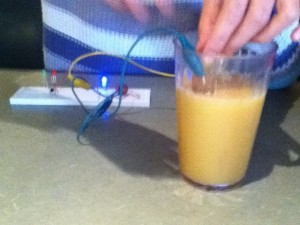 Our team got second place in the second design competition.