This is the final project I made for my foundation seminar course. Each of us have to pick an activism topic and design a campaign about it. I pick climate change and decided to make a website. All of the pixel arts on the website are my artwork. The attached video is a screenshot of how website function, and in the end the video show a little bit of my HTML and CSS code. Most people love retro pixel design of the website. This is the only computer science project I did in first semester.

For ENGR 100 Final Design/Build Project, my team created an educational device called “Conductive Cart”, with the goal of teaching the children about conductivity and its affect on electrical components through the use of electrical motors. 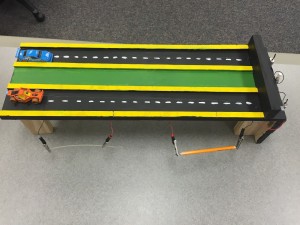 “To do this, we constructed two circuits with alligator clips in the middle of the circuit to allow the kids to connect various materials to test the conductivity of the selected material.  We had two of these attached to a “race track” with two cars connected to their own motor, allowing the kids to compare the conductivity of two materials based on the speed of the car after current was sent through the material and into the motor.  The motors’ speed would depend on the materials level of conductivity allowing them to see which material has a better conductivity.  Racing two cars allowed the users to see quantifiable data of the effectiveness of the materials conductive qualities based on the speed of the cars and the time between the two cars hitting the finish line.” [1] 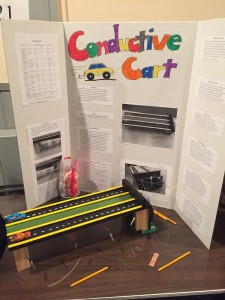 “We found this very effective in showing the results of conductivity. We supplied copper, steel, graphite, wood, and plastic to the user to test, and the results of the races were effective in showing the children the difference between conductivity between the two materials they selected. The children learned that the metals made great conductors and that materials like wood and plastic were not conductors. Obviously  since we implemented electricity into our project, safety was a concern. In order to make this safe for kids to operate, we used 6 volt motors powered by a 6 volt battery pack, which was a safe level of electricity but powerful enough to pull the cars and allow the speed of the motor to vary. The speeds were slow enough for the children to see variations, while still being fast enough to entertain them as a real race.  Most of the users were able to quickly pick out the best conductors, predict which material would be most resistive, and grasp the basic concept of conductivity.” [1] 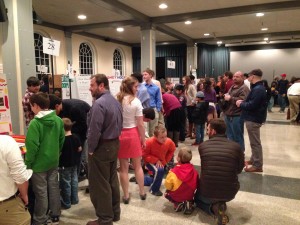 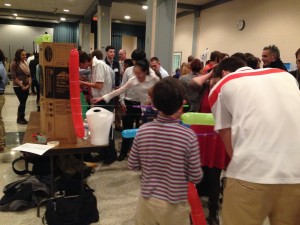 The Engineering Expo was a fun experience. We introduced our product to the kids, and they seemed very excited about our device. There was smart kid that know everything. There was kids that were very curious, they tried their material into our device instead of ours. Only after haft the time of the expo, we have two people sign up for our device. 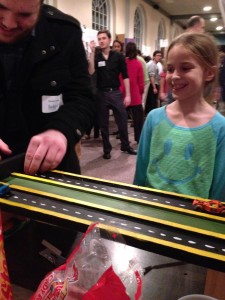 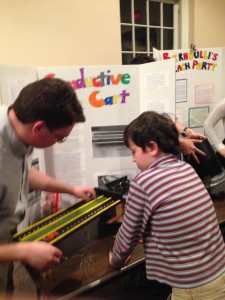 However, the two people who signed up did not coming. So we waited to the end of the expo, and luckily, two kids take our device and our poster. I was proud of my team: we worked very hard to finish this amazing device. 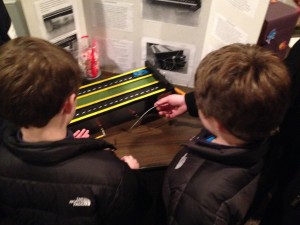 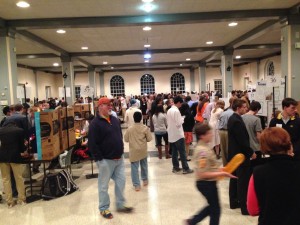